FOR IMMEDIATE RELEASE No. 2992

TOKYO, February 8, 2016 - Mitsubishi Electric Corporation (TOKYO: 6503) announced today that it has developed a small, high-precision air-quality sensor, the world first to detect all fine particles measuring no more than 2.5 micrometers in diameter, called PM2.5, as well as pollen and dust. It also senses the density of particles precisely. 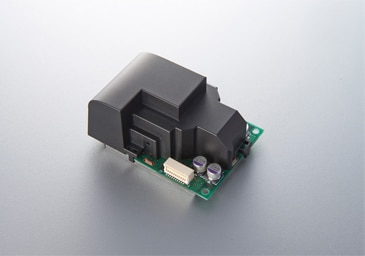 Scattered light from PM2.5 particles is measured with Mitsubishi Electric's unique double-sided mirror design, which collects about 1.8 times more scattered light than conventional single-sided designs. An air flow controller provides stable airflow. Components were optimally designed to achieve a small form factor and were carefully aligned to avoid obstructing the airflow and laser beams. Mitsubishi Electric's original shape-discrimination algorithm distinguishes between pollen and dust based on the respective differences in the optical characteristics of their scattered light, resulting in the world's first sensor capable of detecting all PM2.5, pollen and dust particles.


PM2.5 has posed a serious problem, causing air pollution and health-related issues in countries such as China, India and Japan. The trend has raised public concerns and increased the demand for high-precision air-quality sensors to detect PM2.5. At present, however, high-precision sensors for PM2.5 are large and expensive, limiting their applications to commercial use only.